Dennison Trailers are committed to manufacturing our product to the highest quality standard utilising processes that are compatible with maintaining the integrity of the environment and the prevention of pollution.

All activities on-site will be completed in a manner which protects all individuals whilst ensuring that there is no adverse effect on the environment.

We are delighted to sponsor Fylde RFC player, Nick Ashcroft. Good luck to Nick and Fylde RFC for the season! 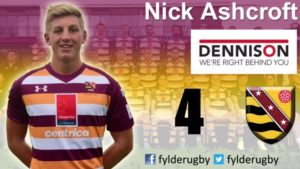 We have been a contributor and supporter of Lancashire Boys & Girls Clubs for many years, with Jane Dennison for a number of years a member of their board.

A registered Charity, Lancashire Boys & Girls Clubs is an organisation committed “to inspire and enabling all young people, especially those considered to be disadvantaged, to realise their potential as productive, responsible and caring citizens.”

Find out more by visiting their website here www.labgc.org.uk

A keen supporter of the club, James Dennison, his friends and family can be found regularly attending matches and events at the Globe Arena.

Having been a Morecambe FC sponsor for over 20 years now, we are proud to continue to support Jim and the boys.You’ll probably notice spot us around the ground in places such as the advertising boards.

Find out more about Morecambe Football Club on their website here www.morecambefc.com

Dennison Trailers has been a proud sponsor of the ‘Morecambe Missile’ John McGuinness for several years.

The Padgetts Honda rider is a firm favourite amongst the Dennison factory employees in both Lancaster and Naas where his progress in races such as the North West 200, Isle of Man TT and Ulster GP is closely followed.

As part of the company’s 50th Anniversary celebrations, a golden trailer was built for the Multimodal show in Birmingham in 2016.

Many of the parts and materials for the ‘one off’ trailer’ were kindly donated free of charge by Dennison’s major suppliers amounting to £10,000, a figure matched by us, with all monies going to a wide variety of charities selected by staff from the firm’s factories in Lancaster and Naas.

Our deal with Dennison Trailers has been flawless from start to finish, you are really looked after from the outset and any requests we had were handled smoothly and without complication. As a customer, we have huge confidence in Dennison Trailers and their product. Before signing off on the trailers, we were brought over to see them in advance and have really enjoyed the whole buying experience. We will certainly be back for more!

The service we received from Dennison Trailers was exceptional, with all of their team going above and beyond to meet our needs. Offering us a great customer experience from the start, the company really couldn't do more for us

Working with Dennison Trailers has been a pleasure. They have been very flexible to our requirements and have produced this and many other trailers to our specific requirements. We were delighted to share in a fantastic milestone of 50,000 trailers with them.

The service we received from Dennison Trailers was exceptional, with all of their team going above and beyond to meet our needs. Offering us a great customer experience from the start, the company really couldn't do more for us.

As we continue to grow we rely on our suppliers to support us. We selected Dennison again due to the fantastic working relationship we have with them and the high standard of their products.

We were in need of a supplier that could understand our business needs and work with us in a partnering way when we came across Dennison Trailers. With a strong focus on customer service, they really identified what our business needs were and delivered a flexible solution. With a dedicated long standing team, they have given us the confidence that they really understand their product and have ensured that we have been able to deliver our business goals on time and in budget."

What Makes a Dennison Trailer?

Sign up today to receive our monthly newsletter to find out more about what's going on at Dennison Trailers.

Feel free to use the form to contact us or get in touch on the details below: